Before you read any more, go google "cacahuamilpa caves." Then, incorporate a trip to them to the trip to Mexico that you are planning.  We went to them as part of the second free trip we had with the university, and it was awesome.  Like our Wine and Cheese tour, we left the university at the crack of dawn, drove for about four hours, and arrived at the caves around ten.  We walked down a short path, and arrived here: 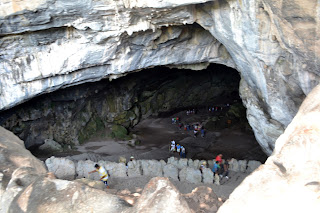 My Lord of the Rings obsessed geeky self immediately thought, "THE MINES OF MORIA!" For those of you who are not dorks, the Fellowship of the Ring travels through the Mines of Moria in order to cross the mountains, only to find that the dwarf city has been destroyed by goblins and...you know what, this is just sounding more and more dorky.  Anyway, it's cool. 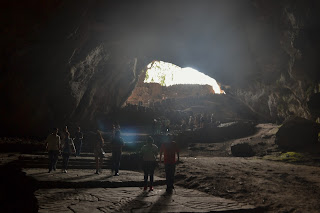 The Caves of Cacahuamilpa were formed from an underground river over 35,000 years ago (I think) and the cave system is one of the largest in the world.  The parts open to the public go back about 4 kilometers, and there is a large sidewalk with lights going through the whole part.  Our guide was very thorough, although she spoke a bit like an auctioneer.  We stopped about every 50 meters on the way in so she could explain more of the history of the cave and show us some interested formations.
As she shone her flashlight on a clump of rocks to reveal a shadow that looked like a bird, or a tiny spot on the wall that looks like a rat, or a small bit of rock that looks like a lion, we couldn't help wonder, "Who the heck finds this stuff?"  My favorite shadow story was one that looked exactly like a couple embracing, and as the guide moved from one side to the other, another figure appeared, the couple separated, then the figure disappeared and the couple embraced again.  The other figure? The mother in law, of course!
As we got farther and farther back into the cave the air got increasingly moist and thin.  By the time we reached the turn around spot, we were all pretty damp and had a bit of a headache.  But due to the amazing scenery, I didn't mind.  There was not a boring part of the walk.  Every new space revealed dramatic structures and new stories.  My pictures really do not do it justice. 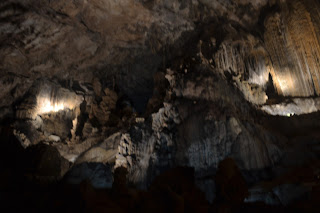 Although the lighting may seem unnatural and intrusive, I think it was very well done, and made the walk much more interesting.  On the way back, only the sidewalk lights were on, and you really couldn't see much of the area around.  After about 2 hours of walking inside the caves, we emerged back into the hot sunshine, and made the 45 minute drive to the center of Taxco, yet another Pueblo Magico. 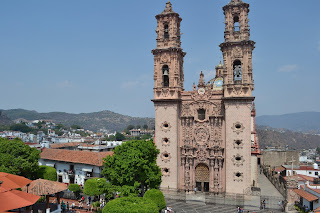 Jake, our friend Aubri, and I were all quite hungry by this point, so we walked to the zocalo with one thing on our mind: food.  A guy on the street recommended a place with a terrace with a great view and good food.  He was not wrong about either.  Taxco is very beautiful; it looks a bit like Europe due to the windy cobblestone streets and the white buildings with the reddish roofs.  Once we chowed down, we were ready to explore a bit.  Like Cuetzalan, it is built on a hillside, so we got in our leg workout.  Taxco is also famous for its silver, and there are approximately a bajillion stores selling silver in varying stages of tackiness. 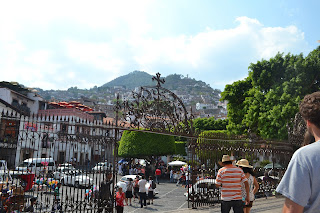 Besides that, there isn't much else.  We walked around for a while looking for something more, but we ended up sitting at a cafe, overlooking the zocalo, and enjoying some milkshakes and relaxing until we had to go back.  Once again, a great day trip.
Posted by sam slice at 7:20 PM